I’m so excited to share with you the brand new music video for “S.A.M.B.A. (Shiva’s Adoration of Mata Bhavani’s Ambrosia)” filmed in Rishikesh, India.

Recently, my family, a small group of Bhakti brothers and sisters, and I converged on the banks of Ma Ganga (the Ganges River) to film a video for my new album, ROOTS, ROCK, RAMA! The song we focused on was “S.A.M.B.A.,” a prayer to Lord Shiva, which brings together the ancient culture of India and the Afro-Brazilian musical expression from Bahia, Brazil.

Initially, I had been thinking of making a simple and elegant video for the song in our home area — perhaps a bit of filming on the beach, maybe some up on Mt. Tamalpais, definitely local. So we got together with our friends Todd and Andrea Boston, who, aside from everything else they do, are beautiful filmmakers, and discussed the possibilities. None of my great ideas sparked any excitement and we were sitting around the table feeling a bit perplexed. At that moment, Nubia walked down the stairs from her little attic office where she’d been listening to our conversation and said “We need to film this in India, in Rishikesh, where Ma Ganga (the Ganges River) flows out of the Himalayas. Jai, you’re 65 now and this album is a big turning point. And the video has to be just as amazing as the music. And you’ve been longing for India for the last 7 years and we can see Siddhi Ma (our Indian ‘mother’). And we can put on and film a concert and have a total blast!” Of course, my first response was “No way!!!!” Over the last several years I’ve found traveling more and more difficult and hard on my nervous system so I’ve really been resisting overseas journeys. But Nubia repeated herself, Todd and Andrea lit up like comets, and I said, “Uh…. Ok, then!” 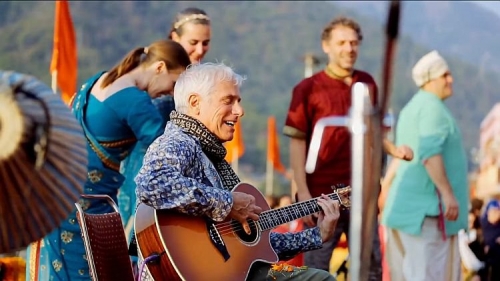 Well, within a day we had our airline tickets. Parmarth Niketan Yoga Ashram in Rishikesh said “in the same of Sri Krishna” they’d host the concert; Sushant Mohan, our friend and local event producer said “in the name of Bholenath (Lord Shiva)” he’d promote it. Gaura Vani, Visvambhar, Kamaniya and Keshavacharya Das all said they were already going to be in India (!!!!) and, believe me, the wheels were rolling. Prajna Vieira, who sings with me almost all of the time here in California, and Gui Vitali, a great Brasilian friend and percussionist, both launched GoFundMe campaigns and had their tickets within a week. And, best of all, Ezra’s sixth grade teacher said he thought two weeks in India would be WAY more valuable than two weeks in school!!!! Me, myself and I, well, inside I was freaking out, but the call of spirit was just too strong and, despite all my fears and doubts, I couldn’t say no….

However, anyone who knows India — in fact, anyone who knows LIFE — knows that not everything goes according to plan! But after many crazy mishaps and some very serious challenges, the video was completed and is now ready to be shared with the world. And I love it!!! Aside from expressing so perfectly the feeling of the song, it gives you a glimpse into the lives and hearts of my family and my friends, and invites you to come and join us on this endless pilgrimage of love.

I hope you enjoy the ride…

Love to you all,

P.P.S. Remember that for every CD sold, a tree will be planted through OneTreePlanted.org.