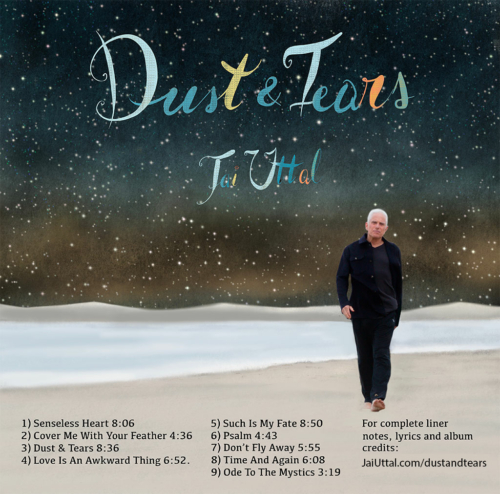 Dust and Tears is one of the most introspective, profoundly personal albums in the vast catalog of the beloved, world devotional musical innovator Jai Uttal. It is also one of his most boldly adventurous recordings—an inspired synthesis of divine poetry and song from across the ages and around the globe. The musical palette is relatively spare, but nonetheless sparkling and spellbinding—weaving together myriad world music flavors to create a wondrous, warm tapestry of devotion and love.
Over the course of nine pristine tracks—gorgeously recorded, as always, by Ben Leinbach—Jai invokes and honors the great singer-saints of India’s Bhakti tradition, the beauty of Old Testament palmistry and the heartfelt songs of America’s wandering, folk-singing storytellers.

“In my kirtan, mantra and prayer singing over the years, I’ve felt deeply connected with the men and women of the ancient past,” Jai says. “People who invested their hearts and souls in these words—these mantras— and who connect with us today, and lend us their shakti, their hearts, their emotions and the power of their prayers, to increase the power and potency of our prayers.”

In creating Dust and Tears, Jai collaborated closely with his wife of many years, the yoga teacher, dancer and author Nubia Teixeira. The initial inspiration for the album came from her, he recounts: “Nubia was looking through some books of ancient mystical songs from India and she said, ‘How about we make a project where we take these songs, poems and prayers and put them kind of in our own language and music?’ I’ve always been a little insecure about writing English words. But the reality is that Nubia wrote well over 50 percent of these words. Sometimes it was a little bit more me, other times it was a little more her. And sometimes it was both of us. What a fabulous gift to be able to collaborate with my wife in this way.”

But while the vision was boundless, the budget was tight. So Jai assembled a core coterie of frequent collaborators, friends and family. As well as co-producing the album with Jai, Ben Leinbach played bass and percussion. Jai’s 17 year old son Ezra played keyboards, creating sublimely layered orchestrations and earthy synth solos. Accordionist Sunniva Brynnel, who also played on Jai’s previous album Let Me Burn, comes to the fore on Dust and Tears. Her evocative melodies and accompaniments mix a sense of Old World romantic yearning with a sweet savory soupcon of Silk Road spice.
A few more gifted musical guests lent their colors, but the production remained intimate—leaving ample space for each individual talent to shine. Not least of all Jai. His vocal performance on Dust and Tears hits new heights of ecstatic bliss and plumbs new depths of despair and longing—the voice of a prophet, crying forlorn in the wilderness, yet lovingly swaddled in layers of angelic backing vocals. Six voices strong, the Pagan Love Choir (Sandy Cressman, Prajna Vieira, Natalie Cressman, Sandy Griffith, Lakshmi DelSanto and Lucía Lilikoi) also became an integral part of the sonic landscape.

So what began as a budgetary necessity became a source of inspiration.
“I began to really like the more naked and vulnerable production,” Jai says. “My voice in many cases is not surrounded by dozens of instruments. That’s very challenging for me, emotionally. It’s very intimate and there’s this really heartbreaking mood in many of the songs. I took Mirabai, the 16th Century Bhakti singer and saint, as my inspiration. I’ve been to her house in India; it’s preserved by the government. It’s just a very small house that you stepped down into. And it had two little rooms. You could just imagine Mirabai day and night sitting there singing the songs, surrounded by the devas, gods and goddesses. Just singing in an extremely vulnerable way—longing for Krishna.”

Dust and Tears plunges the listener in deep, right from the first strains of the opening track, “Senseless Heart.” The lyrical inspiration comes from the Bauls of Bengal, the wandering, mystical singers and players with whom Jai lived and studied in the winter of 1973. But the groove is pure Jamaican Nyabinghi, the hypnotic devotional chanting tradition of the Rastafari people. With his multifaceted musicality, Jai Uttal has always excelled at blending musical styles and spiritual traditions. Love is the common denominator.

From here, the mood grows more subdued and reflective. “Cover Me with Your Feathers” recasts the Biblical 91st Psalm in a gently lilting, tropical musical setting. It is one of two tracks on Dust and Tears that are drawn from Old Testament sources. The other, simply titled “Psalm,” is an acoustic guitar-based  rendition of the well-known 23rd Psalm (“The Lord Is My Shepherd”). With glorious choral backing from the Pagan Love Choir, the simple yet stately arrangement puts this piece in a league with other universally resonant declarations of faith such as Bob Marley’s “Redemption Song.”
Ever adept at blending his Jewish ancestral heritage with his deep devotion to India’s Bhakti tradition, Jai counterposes the soul cries of the Biblical psalmists with the heartrending love-longing of legendary Krishna and Radha devotees such as Surdas, Chandidas, Mirabai, Vidyapati and Govindadasa. With songs like “Such Is My Fate,” “Time and Again,” “Love Is An Awkward Thing” and the title track, Jai’s pan-cultural, harmonically adept songcraft and Nubia’s serenely sonorous poetry forge innovative new contexts for beloved Bhakti themes and mantras. We hear them as if anew.

“These are my people—these Bhakti songwriters from the 13th through 16th centuries,” Jai notes. “These are my mentors—the people from whom I’ve received inspiration over decades and decades. It’s nothing new for me, but perhaps it’s coming to fruition on this album. You see pictures and descriptions of the great Bhakti songwriters falling apart emotionally, in complete weeping and wailing agony. And at the same time, dancing in bliss. This is one of the esoteric mysteries of the Bhakti heart. How can those two things coexist? It’s also manifested in romantic love—this love for another human that’s so rich and so brimming with fear and attachment and so many other emotions. It becomes transposed, or reset, to the Divine Beloved—the one who is the source of all longing and the fulfillment of all longing. That’s what turns these love songs into the most deep spiritual practice.”

The same sense of loss and longing imbues what is perhaps the album’s most personal song, “Don’t Fly Away,” occasioned by the death of a very close friend who suffered from early onset Alzheimer’s. With wistfully poetic couplets like “Time is just a sad sad song, with nothing to say,” the lyric recontextualizes the joy and tears of one human lifespan within a larger, cosmic context—a perspective that offers comfort and hope. Among its many virtues, Dust and Tears is a great source of solace for troubled souls.

The close and deeply harmonious collaboration between Jai and Nubia, a divine couple in their own right, makes Dust and Tears a unique and landmark entry in Jai Uttal’s 22 album catalog. Their lovingly attuned synergy manifested the album’s closing track, “Ode to the Mystics,” a homage to humanity’s visionary poets and singers of times immemorial, cast as a simple Appalachian banjo tune.

“Nubia heard me playing this waltz on my banjo,” Jai recounts, “and she immediately rolled out the words. I felt so much joy in singing that. I had a few more verses that I wrote. But they didn’t stand up. We didn’t need them. It didn’t need to be more complicated. And immediately we knew that this should be the last song on the album. Musically, it kind of brings it all back home. Old-timey music and ballads were my very first love. So I can say it brings it home for me. And at the same time, the songs became the key. The gift that we were given by these ancient mystics of all the traditions—it’s pure grace that the ancient ones left this for us so that we don’t completely fall apart in this crazy world. That’s what the song says: ‘Thank you for leaving these songs that are now the key to connect the heart to the spirit and keep our heads from drowning in the treacherous ocean of life.’”

Alan di Perna, One of America’s foremost music scribes, Alan di Perna has been writing professionally about popular music and culture since 1980. 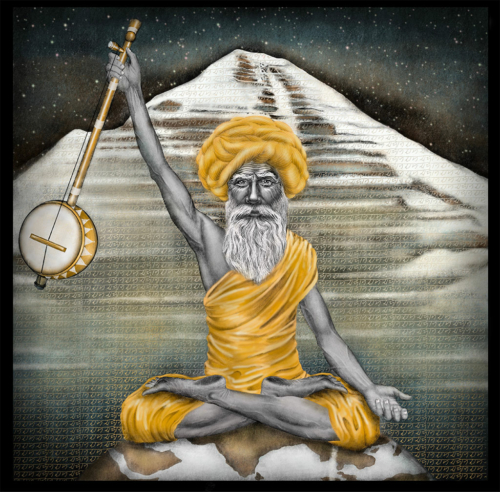