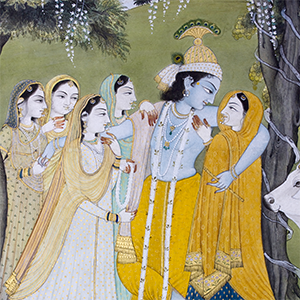 My guru, Neem Karoli Baba, would frequently send his devotees away, often with the simple word “jao”, or “go”, sometimes giving some direction or suggestion, but more often than not just telling us to leave. Other times, we would arrive for darshan in the morning only to find that he had disappeared in the night, without a word or a message….

Looking back on that mystical time, I see that it was during those periods of separation from Maharajji that my spiritual longing would become intensified, that my practices would be filled with fire. And, strangely, it was during those weeks of seeming sadness that my soul would at times be touched with ecstasy, that my guru would feel closest. When he was far away physically, he would come in dreams that felt more real than “reality”.

Was this a lesson, a preparation? Or just one of his many amazing gifts……

“In the sorrow of separation, the gopis found Krishna within themselves, remembering his gestures and deeply affectionate smiles.They remembered his playful glances, his words, and his various pastimes with them. The gopis’ madness in love caused them to adopt their lover’s mind, sending theirs to him.Although some of the gopis declared themselves to be Krishna, they began searching for him at the same time. Theirs was a case of mistaken identity caused by LOVE.”
~ Aesthetic Vedanta, by Swami B. V. Tripurari

Radha has been singled out by the sages because of her spiritual maturity. Her all-consuming,un-selfconscious love for the Lord has become the grand ideal guiding those who, knowing of the ultimate secret of the heart, seek the divine through the agency of feeling. The creative, erotic tension between Radha and Krsna has served many generations of spiritual practitioners as a potent metaphor for their own inner struggle, yielding both the joy of union and the despair of apparent separation and leading to ever more profound love. The powerful myth of the rasa-lila is true for all times, because it captures the unique relationship that eternally exists between the divine and the human heart overflowing with transrational, rapturous love for the supreme person, the source of all beings and things.
~ Aesthetic Vedanta, foreword by George Feurstein

Sri Caitanya taught the doctrine of love in separation as means of union with the Absolute. The yearning that is characteristic of separation from one’s beloved is the intensity with which one must cultivate spiritual life.

Separation and union are two banks of the river of love. Separation serves to accent union, and union holds within itself the fear of future separation.

“As dawn approached, Radha and Krsna went arm in arm from their forest cottage, about to step into the pasture on their way home. At that time, Syamasundara, the beautiful dark boy, fearing the imminent appearance of the sun and the arrival of Radha’s mother-in-law, suddenly removed Radha’s arm from his shoulder. It was as though the joy of their union ended at the junction of the forest and the pasture, where the kingdom of anxiety began. Radha had obtained a great treasure in the form of Krsna’s arm, with the help of the general of eagerness. Yet now, as they arrived at the edge of Vraja, a more powerful soldier, doubt, had defeated this general and forcefully removed her treasured possession. When the doubts that threatened Radha and Krsna refused to allow them to continue on to their homes in union, their pain in separation caused their friends who were leading the way to sigh and break out in tears.”

Sri Caitanya embodied “raganuga-bhakti” in its perfection. He revealed that the path of lawless, passionate love of God was the essential and highest advocacy. Passionate love is a life above law, where love need not be regulated, its current is so strong.
~from Aesthetic Vedanta, by Swami B. V. Tripurari