FacebookInstagramTwitterSoundCloudSpotifyYouTube
Preview of Let Me Burn by Alan di Pernaadmih2021-08-10T17:01:52-07:00 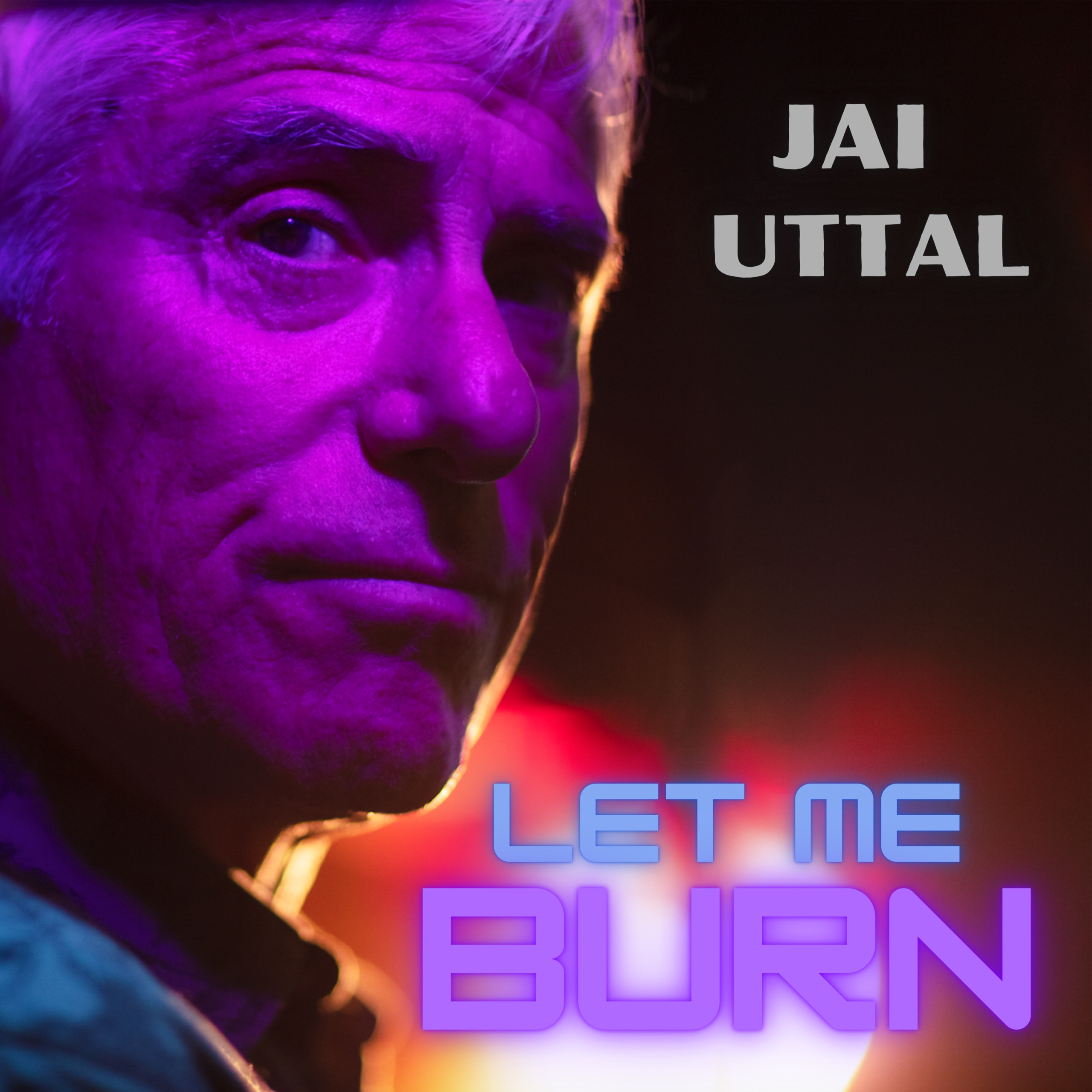 A tranquil mood of quiet introspection pervades the five tracks that make up Let Me Burn, the new digital album from world music trailblazer Jai Uttal. These songs were forged in the crucible of the crippling COVID-19 pandemic that gripped the globe for most of 2020 and well into 2021. But, with characteristic mastery, Jai has transformed that experience into something truly beautiful—a healing, meditative musical retreat.

“This album was really birthed in the pandemic,” he says. “There were a lot of different moods that came through at that time. But there was a real effort, I would say, from me, my wife Nubia and son Ezra not to get isolated. The world was shutting down and people around us were shutting down. But I said, in this time of lockdown, let’s not lock down our hearts.”

As a result, Let Me Burn is a richly collaborative work, with contributions from mantra music icons Deva Premal and Miten, bansuri flute virtuoso Manose, singer/songwriter Lucia Lilikoi, the Chicago Children’s Choir and producer/multi-instrumentalists Ben Leinbach and Joby Baker. Nearly all the collaboration was done remotely, but physical isolation only served to strengthen the heartfelt bond among the musicians and singers.

“I started working with people on these songs without really knowing what I was going to do with them,” Jai recounts. “And my wife said, ‘Why not release these songs as an album in celebration of your 70th birthday on June 12? This birthday is a major milestone. So let’s mark it.’”

As the world struggled with COVID and widespread political turmoil, Jai faced his own set of personal challenges. No longer able to perform live, his income was impacted. And as a lifelong asthmatic soon to turn 70, he was among those most at risk from COVID. Meanwhile forest fires raged throughout the area of Northern California where the artist and his family have lived for years. But by far the most formidable challenge was the double fusion lumbar spine surgery Jai underwent in February of this year to correct what had become a debilitatingly painful back condition.

Adversity, however, can be the handmaiden of both wisdom and profound artistic beauty. For confirmation of this one need look no further than the track that opens Let Me Burn, the wistful, elegiac waltz-time “Campfire Sri Ram,” featuring Deva Premal and Miten.

“I love those guys and we go back a long way together,” Jai says of the duo. “We worked hard to get the mood of this song just right. It’s a joyful melody, but there’s an undercurrent of poignancy that I think we were able to capture. Our collaborations are always filled with love. We’re fans of one another and good friends at the same time.”

A hypnotic ostinato on banjo—Jai’s first instrument—anchors the album’s second track, the gently percussive, delicately evocative “Ladder of Longing.” A setting of the timeless Hare Krishna mantra, the composition started out as a simple iPhone demo that Jai sent to producer Joby Baker, who bejeweled it with gemlike instrumental colors and a plaintive string arrangement. “I had a real immersion in the banjo during the pandemic,” Jai says. “I started taking lessons online, and I’m still taking them. Banjo was my first love, but it was in the background for a long time.”

Nestled at the very heart of the album—the third of five compositions—is the record’s title track and, in many ways, its keynote song. Although, ironically, “Let Me Burn” is the one piece on the album that wasn’t written and recorded during the pandemic. It’s an outtake from Jai’s 2009 album Thunder Love that had begun life as part of an opera—a theatrical setting of the ancient Hindu epic, The Ramayana—that Jai had co-written for the Chicago Children’s Choir.

“It was completely forgotten,” Jai says. “Just some old sound file. I found it and said, ‘This is great! Why didn’t we put it on Thunder Love?’ It’s so emotive. Maybe it was too emotional for Thunder Love, but it seemed to fit the mood of the pandemic. I felt like the world was burning. With the isolation, people were living with such fear, paranoia and financial insecurity. I just had this sense of burning. So what’s burning? You have to burn away karma, burn away negativity, burn away the husks of the heart.”

Fittingly, this song is followed by a purification mantra. “Asatoma” is a setting of the ancient Pavamana Mantra, featuring the singer/songwriter Lucia Lilikoi, a near neighbor and friend of Jai’s.

“I met Lucia because she was a yoga student of my wife, Nubia’s,” Jai recounts. “They became friends and, through that, we became friends. She’s a beautiful singer and we’ve done a bunch of gigs together. She was just getting her home studio together and I don’t have a home studio of my own, so I called her and said, “I have this song. Let’s make an experiment and work on it together. And of course it’s a very powerful prayer—an ancient, ancient prayer.”

The album strikes a deeply introspective final chord with “After the Fire (Shiva’s Lullaby).” Against a simple backdrop of droning harmonium and keyboards, along with Jai’s soulful acoustic guitar improvisations, he intones a guru mantra that is a deeply personal part of his life and spiritual practice.

“When I recorded the track at Ben Leinbach’s studio, I just sang the guru prayers, called the guru shlokas, before going into the main chant. Even as I was singing, I thought, ‘We’ll just cut that out later.’ But that Sanskrit prayer is very meaningful to me. It’s one that I sing as part of my own daily practice. And for nearly every concert I’ve given—whether it’s live-stream or in person—I always start with those prayers, often with different melodies. I’ve sung them on a few of my albums too.  But on ‘Shiva’s Lullaby,’ I even sing my guru’s name at the end of the track. I’ve never put that on a recording before.”

On his 70th birthday, with the world gradually emerging from lockdown, Jai Uttal took a pleasant stroll along a Northern California beach. He was still in recovery from his back surgery, but nearly pain-free for the first time in years. “That was my goal in getting through the surgery, which was terrifying,” he says. “Nothing really cosmic, just ‘I hope when I come out of this surgery I can take a good walk on the beach without pain.’ And on my birthday I was able to do that.”

Let Me Burn is the 21st album in Jai Uttal’s prolific and profoundly innovative body of recorded work. Coming at a moment of synchronicity in his own life and the evolution of our planet, it marks another milestone in the career of an artist who has always pushed musical boundaries by following the simple truths of his heart.

“Looking back as a 70-year-old, I’m very very proud of all the work that I’ve done,” he says. “I feel like I’ve been blessed to have created real beauty. And I hope that this album brings a sense of joy and renewal after all the chaos we’ve been through—like a big, deep breath. For myself, I feel a lot of hope. There’s a lot more inspiration and a lot more creative work to come.”  ~

Alan di Perna, One of America’s foremost music scribes, Alan di Perna has been writing professionally about popular music and culture since 1980.

Read the liner notes for Let me Burn

Feeling the global need for a healing and nurturing sonic balm, Jai made his first single release from “Let Me Burn” a deeply meditative piece called “Shiva’s Lullaby”.