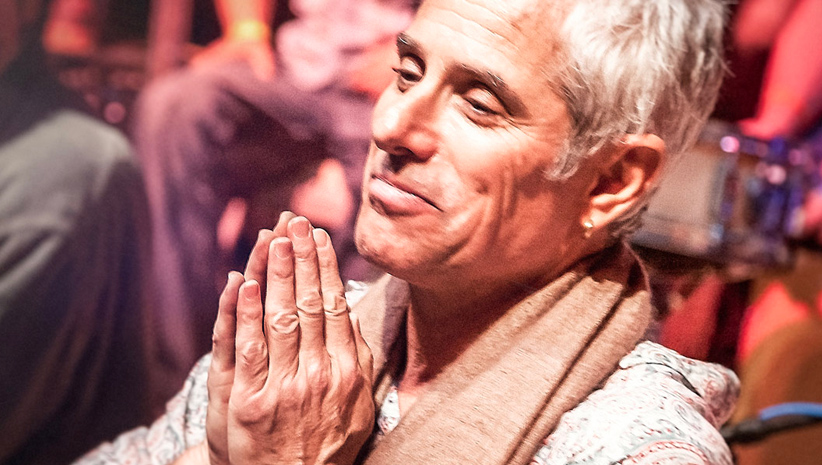 An Evening of EnCHANTment at Jivamukti Tribe Gathering in Barcelona- Spain

Kirtan is the calling, the crying, the reaching across infinite space — digging into the heart’s deepest well to touch and be touched by the Divine Presence.

Embark on a vocal journey through the sacred sounds of ancient India. With call-and-response group chanting and storytelling, Jai Uttal creates a space of invocation, prayer, and heartfelt expression. “These ancient chants,” says Jai “contain a transformative power and healing energy. By singing these prayers we join a stream of consciousness and devotion that has been flowing for centuries.”

Jai has been leading Kirtans worldwide for close to 50 years, creating a safe environment for people to open their hearts and voices.

No previous experience is needed. This is an exploration and expression of the heart and the spirit.

Jai Uttal is a kirtan artist, multi-instrumentalist, and ecstatic vocalist. He is considered a pioneer in the world music community with his combined influences from India and American rock and jazz. Jai has been leading, teaching, and performing World Music and kirtan—the ancient yoga of chanting or singing to God—around the world for close to 50 years, creating a safe environment for people to open their hearts and voices.

He grew up in New York City and lived in a home filled with music. Jai began studying classical piano at the age of seven, and later learned to play old-time banjo, harmonica, and guitar. At age 17, he heard Indian music for the first time, and two years later moved to California and studied under the famous sarod player, Ali Akbar Khan. Jai later began taking regular pilgrimages to India, living among the wandering street musicians of Bengal, and singing with the kirtan wallahs in the temple of his guru, Neem Karoli Baba.

Jai has emerged as a leading influence in the Bhakti tradition. He considers bhakti to be the core of his musical and spiritual life.

We are excited because so many of you will come to Barcelona from all over the world and once again we will feel the support and benefit of our amazing global satsang. So many of you tell me that you feel isolated in your little corner of the world. There is really nothing more lonely and isolating than living in the midst of bad company. When you feel the support of others, you can be the change you want to see.

The experience of tribe is universal. All cultures in the world today emerged from tribes of all kinds in our distant past. These tribes predate the creation of nation states, and are rooted in cooperation in order to thrive. We learned how to form tribes from studying herds of bison, flocks of birds, and schools of fish. We formed tribes to lessen suffering…and it worked! We all practice yoga to lessen suffering…and it works!

Jivamukti Tribe Gathering in Barcelona- Spain.
From May 7th to May 10th 2020
Museum of Contemporary Art